Listening in an Age of Musical Plenty

There are over 30 million tracks available to stream on Spotify. That’s a lot of music to listen to, and most of it you’ve never heard before. How is one to make sense of all those sounds? 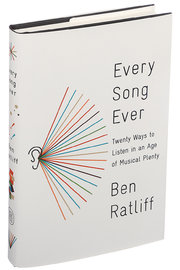 Ben Ratliff has some ideas. In his book, Every Song Ever: Twenty Ways to Listen in an Age of Musical Plenty (Ferrar, Straus and Giroux, 2016), Ratliff sets out to equip us with conceptual tools to deal with the overwhelming abundance and – crucially – diversity of available music. I nod along when I read that we need “reasons for engaging as a listener that can encompass Beethoven and Bach as well as Beyoncé, Hank Williams, John Coltrane, Drake, Björk, Arvo Pärt, Umm Kulthum, and the Beatles.” I’m delighted to meet new-to-me artists, and to find many of the tracks compiled on an epic, 15+ hour Spotify playlist.

Every Song Ever is “attempting to respond to a situation of total, overwhelming, glorious plenty” in listening choice. But despite there being much to like about this book, its parting lessons are troubling. This, it seems to me, is because Ratliff has taken aim at the wrong targets. Ratliff and I want similar things – richer experiences of more music – but he’s fighting the wrong enemies, and hence leveraging the wrong tactics.

There are three main “bad guys” in Every Song Ever. First up: the algorithms used to generate listener profiles and give musical recommendations. Now, I do find the Spotify surveillance state a bit creepy. I feel its watchful presence as I make listening choices – a presence that comes not only from the company (to be manifested in its conversion of my listening history into new musical recommendations for me), but also from fellow listeners, who might “follow” me – and whom I’m encouraged to surveil in turn. What we are listening to at this moment, or else to what and when we last listened, is information that by default is out there to be seen.

But what does it mean to – as Ratliff calls on us to do – “listen better than we are being listen to?” The symmetry of the statement gives it a compelling poetry. But with our actual listening to music and the metaphorical “listening” of big data to our online behaviors, we are talking about two very different kinds of thing.

Or are we? The conflation of the two helps motivate Ratliff’s project: it provides a need to differentiate “us” (sensitive, intelligent humans) from “them” (brute algorithms). And so – since algorithms have gotten good at recommending more of the same – we need playlists so diverse that only a human, not an algorithm, could make sense of them. While likely tenable at the time Ratliff was writing the book, advances in algorithmic recommendation have already dated this view. The problematic premise could have been avoided by recognizing algorithms as human artifacts rather than a static Other. Ratliff’s book trains us to hear certain connecting threads through diverse playlists, and so too could an algorithm be trained. There may be good reasons to want to escape Spotify’s “listening” to us, but listening more eclectically is not a way out.

Listening more eclectically can have rationales and virtues besides outsmarting algorithms, however. As Ratliff observes, listening today can be a regular “encounter with civilizations other than your own.” Hence the need for new strategies of sense-making. Which brings us to Ratliff’s second target: the old way of conceiving what it means to listen well. The old way – exemplified for Ratliff by Aaron Copland’ What to Listen for in Music (1939) – was (Western classical) composer-centric: it privileged terms and aims valued by composers, and “preconditioned” listeners to hear through their lens. The result was an emphasis on melody, harmony, rhythm, tone color and compositional structure.

Ratliff instead proposes to refine our hearing through terms derived from listening experiences, and from everyday life rather than from a specifically musical domain. He elaborates a new set of features to listen for, features like: repetition, speed, slowness, density, discrepancy, stubbornness, sadness. He discusses each in connection with numerous musical examples, yielding vertiginous musical journeys like the one that begins with Outkast’s “Rosa Parks,” Beethoven’s “Grosse Fuge,” and Big Black’s “Passing Complexion,” and ends with Georg Friedrich Hass’s limited approximations, Public Enemy’s “Fight the Power” and Black Bananas’s “Powder 8 Eeeeeeeeight” (and includes some Miles Davis, Olivier Messiaen, and Chaka Kahn in the middle – all the tracks united by rewarding our listening for “density”).

Ratliff is correct that melody, harmony, etc. are the “fundamentals” traditionally taught as a prerequisite for intelligent musical listening, and I am excited to try alternatives. The problem comes in the execution. For a critic thinking way beyond the classical canon, Ratliff finds a surprising ally in Eduard Hanslick, the nineteenth-century Viennese critic who famously declared, “the content of music is tonally moving forms.” Ratliff cites Hanslick for the idea that music can mimic the motion of feelings; but more significant is the shared advocacy of a perspective that brackets everything outside the sound as “extramusical” and hence nonessential to musical listening. (Ratliff also cites the views of tape music pioneer Pierre Schaeffer – again for a somewhat different reason, but this thinker too was an influential advocate for a mode of “reduced listening” [Schaeffer’s term] that excludes from consciousness sounds’ material and cultural origins).

And so Ratliff teaches us to hear his selected features, so rich in potential to connect music to its cultural contexts and social histories, primarily in abstract terms. His chapters are enlivened by artist-biographical and wider contextual details (the “repetition” chapter, for instance, relates changes in track length and musical structure to a history of recording formats; the “memory and historical truth” chapter connects certain production features to senses of place and time). Yet he never goes too long without reminding us that as listeners we needn’t bother ourselves with all that (“Do you have to know the context of such a music to at least intuit the density of it? Do you have to know about persecution and history and old practices? I don’t think so. I really don’t think so”).

Interrelated with this stance is Ratliff’s third boogieman: genres. Ratliff sees genre as “a construct for the purpose of commerce, not pleasure, and ultimately for the purpose of listening to less.” It’s hard to see why a construct for increasing music sales would also have listening to less as a goal; Ratliff seems to mean listening to less diversity – he also criticizes genre as a “direct route to the bottomless comfort zone.” When it is so easy to skip a track after just a few seconds (and the vast amount of music to sample might make such efficiency seem attractive), Ratliff’s ‘features to listen for’ really can foster interest and curiosity where one might have otherwise quickly rejected a song “based on an external idea of genre or style.”

The bigger problem here is the reduction of genre to a corporate invention. Genres are much more – and much messier – than that. Genres are forged when communities form around not only characteristic sounds and structures, but also such facets as performance conventions, the image of the musicians, and underlying values. All of these form a context within which to make informed judgments about whether a particular track is good or bad, conventional or innovative, in keeping with or in violation of a listening community’s expectations. That’s why Simon Frith talks about “genre worlds” in Performing Rites: On the Value of Popular Music (1996), and Keith Negus about “genre cultures” in Music Genres and Corporate Cultures (1999). As Frith argues, “a new ‘genre world’…is first constructed and then articulated through a complex interplay of musicians, listeners, and mediating ideologues, and this process is much more confused than the marketing process that follows, as the wider industry begins to make sense of the new sounds and markets” (88). Genres can be exploited and managed for commercial purposes (as they are by labels and stores), but their commercial usefulness proceeds from their wider relevance to the social processes of creating meaning.

Ratliff knows all this. He observes in his chapter on sadness that “there is a culture around any music, and how you understand that culture influences how you hear.” Tellingly, he then proceeds to speak in terms of genre (without apology, for once), explaining the various shades of metal’s myriad subgenres. But he concludes: “every band, song by song, album by album, has its agendas, its concepts, its intent. We are not worried about that. We are worried about the larger issue – the message in the music alone.”

Ratliff’s twenty ways of listening thus add up to a stridently individualistic, even solipsistic mode of musical engagement. The key virtues to hone are a thirst for the inexhaustible supply of music, and an ability to find similarities that defy external categories. All that matters really is how sounds intersect in you. It is the perfect strategy for a solitary listener swimming in an endless sea of recorded music, never needing to come up for air. It makes it ok that “you often don’t know what you’re hearing.”

And so by offering “new ways to find points of connection and intersection with all that inventory,” Ratliff teaches us how to find satisfaction with what Spotify and its kin have to offer. But another way to respond to our “situation of total, overwhelming, glorious plenty” in listening choice is to leverage the similarly overwhelming, glorious plenty in ways to learn more about what we are hearing. Reading Ratliff’s book can be a step in such a direction. But here’s an alternate conclusion: let finding points of connection with all that inventory be enriched by thinking about how all that inventory connects to everything else. Rather than be satisfied by ever expanding playlists, leverage this age of plenty to discover more about when and where a track came from, what it has meant to other people, how it has made a difference in the world. This strategy offers no illusion of mastery over those 30+ million tracks. But it is by listening through the lens of fuller contexts that we can start to hear musical, cultural and social values outside the realm of what we thought imaginable.